How to Make A Quilt Pattern Your Own with Charles Cameron: Part 2

We’re back to finish up with our friend Charles Cameron of @feltlikesweets. Don’t forget to see the first part of our interview about changing quilt patterns. Let’s get to it. 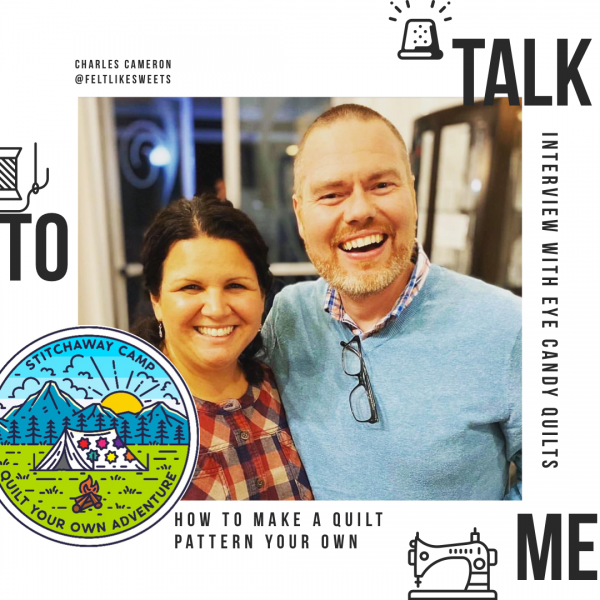 What’s the most common thing you change?

Color has been the thing that I’ve had the most fun playing with, that generates the most significant rewards, I think.  Let’s talk about Protean here! O.k.? It’s about time, huh?

Of course! Go for it!

You know, one change that many people make to a pattern is to make it scrappy, right? There are lots of ways to do this, and lots of great examples out there. I’ve even noticed that many patterns today are advertised as ‘scrap friendly.’

ECQ’s Protean pattern is even written as a scrappy pattern, right? “Keep it Scrappy!” your pattern suggests.

It’s a sickness. I have the scrappiness inside me and I won’t stop. Scraps for life!

It’s a great stash buster! Here’s the funny thing, though: when I read through the Protean pattern, whose figures are in black and white, right? I was drawn to the Top Assembly figure. The black and white diagram highlights the opportunities for color placement.

Ha! Our evil plan is working. We try to keep the patterns so that they’re not too color specific, that way you can make them in any color and they’ll work and be easy to follow.

Yes! And what my eyes were drawn to were the larger diamond, triangle, and square shapes that are created when the blocks are sewn together.  I think you say in the pattern, “a wavy optical illusion that move and change before your eyes”.

So, as I was sketching out a plan of attack for my Protean quilt, I played around with color placement that emphasized these larger angular patterns. 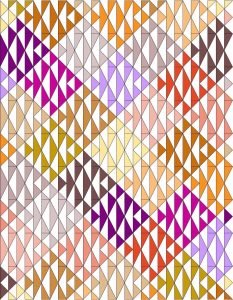 In the end, I choose to go with the version that I did because I figured out that I could get one color’s worth of pieces from a F8 cut of fabric (with a few extra scraps to use on the quilt back!).  Again, it was like a little math equation that just made it so much more enjoyable for me. I’m such a nerd.

Hey! Nerds are cool now. And quilty nerds have always been cool! What’s the easiest thing to change?

While I think color is the biggest opportunity, I think you can easily change a pattern in a few ways: maybe by adding sashing between blocks, for example, or the snowballs to the corners of blocks, as I’ve mentioned before.  You could even consider changing the orientation of each block across a row, if they have some directional orientation.

What’s your best tip for someone wanting to customize a pattern?

I suggest drawing out a few ideas, first.  You don’t need to use a computer or fancy software.  Some patterns come with coloring pages, that’s a great opportunity to experiment.  You could cut out quilt block pieces from construction paper and play around with those, cut them up and tape them back together in a different way or orientation. Test blocks are always a good idea, too. I usually make a few test blocks when planning to change a pattern. My girls have several doll quilts and pencil pouches made from test blocks. 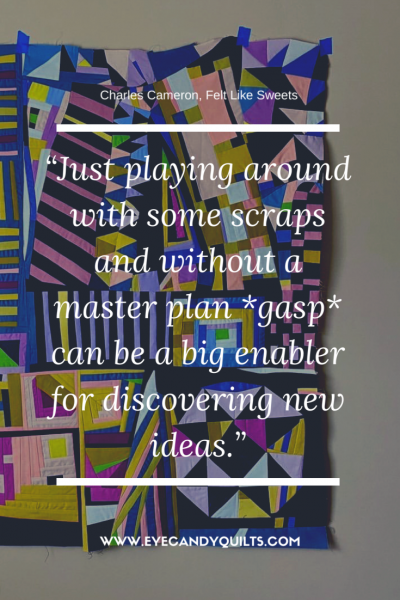 Now, we’ve already established that I love a plan! But I I’ve also found practicing some improv piecing can really help open one’s mind to new possibilities.  Just playing around with some scraps and without a master plan *gasp* can be a big enabler for discovering new ideas.  I recently bough a pack of solid scraps from an Instagram destash sale, and every few weeks pulled out some scraps, cut them up and sewed them back together — improv style.  It was a great way for me to explore without the pressures of adhering to a pattern.

What is something about a quilt pattern that you never change?

Hmm.  That’s a tough question.  I mean I’d never say, “never!”  You know, I’m usually buying or sewing a pattern because I’m drawn to it in some way.  So, I’d want to preserve whatever that aspect was that I was drawn to. But, yeah, I view a pattern like a recipe:  keep the ingredients that you like, add a little wine or salt to taste, but leave out the olives and anchovies. Just kidding, I love olives and anchovies, but you get what I mean!?

Yes! More anchovies or your spice of choice on quilts. Ok,  I want to ask you what I’m calling the Quick Six. The Quick Six are just basic questions for every stitcher I chat with. Ready? Let’s go!

What is your favorite color?

What is your least favorite color?

Brown.  And I don’t appreciate pastels.  I’m sure they’re great, but I don’t care for them.

What is your idea of happiness?

a big bowl of pasta

What is your idea of misery?

I’ll live anywhere if I can bring my family and my sewing machine (and can get a big bowl of pasta).

What is your motto?

Anything worth doing is worth overdoing.

Thanks again to Charles for sharing his quilts and his brain with us. Keep track of his gorgeous creations on Instagram where he is @feltlikesweets. And we’ll share all the closeups of our new Protean quilt Charles made soon!