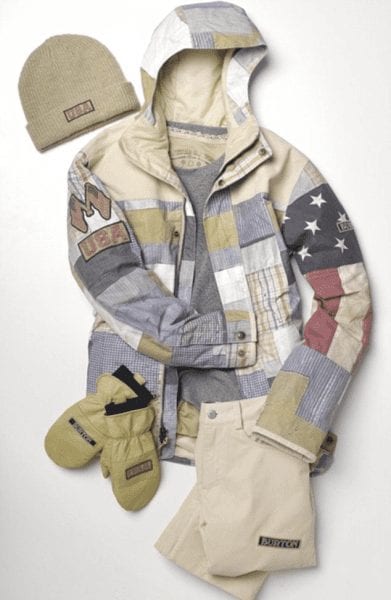 Quilting is headed out to Sochi, and at least for me, in an unexpected way.

Burton was the manufacturer tasked with making the U.S. Olympic Snowboarding Team’s uniforms. Greg Dacyshyn, Burton’s creative director, scoured a Massachusetts antiques show to find a ‘weathered’, aka beat-up-beyond-all-repair quilt. This quilt was then shipped to a Burton employee’s grandmother. This unnamed quilter rearranged the pieces of the antique quilt to better suit the creative vision of Dacyshyn. Then, the magic of technology printed the antique textiles in their new and approved arrangement onto a vinyl competition coat and another puffier coat for strolls around the Olympic village. For a longer explanation of the whole thing, click here.

Yes, there’s a small kerfuffle about the jackets not being manufactured in the USA. Fair enough. In spite of that, quilting is showcased at the Olympics as a distinctly American tradition! An exhibit at the American Folk Art Museum, most likely the Infinite Variety exhibit of red and white quilts, is listed as an influence and example of the ‘craft’s deep roots in American folk art’.  And if we could get the rest of the world, or heck the rest of America, to just drop the word ‘folk’ from in front of ‘art’, we’d be taking a huge leap forward for quilting in the 21st century.While not the most inspiring or intricate of examples, it’s still very exciting to see.

Kudos to that quilting grandma, where ever you may be!